Today we wanted to extend this article on how to create a software RAID on linux with mdadm. We start with the theory.

What is a RAID?

We can define a disk raid as a group or array of independent disks, in fact RAID is an acronym for Redundant Array of Independent Disks. The disks are unified by software or hardware to redundant data and/or use the full capacity of each disk as a whole. This will be easier to understand when we define each type of RAID later.

Software RAID is, as the name says, an application that allows the creation of RAIDs at a logical level from disks connected to our computer. This software creates a file system in which it works behaving according to the type of RAID configured.

What are their main differences and the advantages of each one?

This raid takes the capacity of the added disks and adds them together. For example if we have 2 disks of 1TB with this RAID we will get a volume of 2TB. If the disks are of different capacities, it always takes the lowest one to use, as well as the RPM (revolutions per minute) of the disk. That is to say, if we have a 2TB disk at 7200RPM and another of 1TB at 5400RPM we will have a volume of 2TB at 5400RPM, that is to say, we return to have a volume of 2TB but slower. That is why it is important that the disks are similar.

On the other hand, in this type of RAIDs performance is a priority but not security, there is no data redundancy so if a disk breaks the volume will be corrupted. 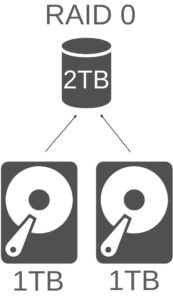 This RAID as in the previous RAID and in all the RAID, the disks must have the same capacity to avoid wasting disks. In this RAID mode the two disks are configured in mirror, this means that the entire contents of the disk is replicated on another disk for every 2 disks 1 disk is dedicated to redundant data. It is recommended for 2 disks. This RAID has an added advantage and they are greater speed of reading multiuser since data of the two disks can be read. However writes are slower as they have to be done on both disks. 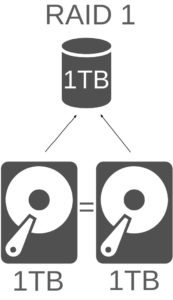 This RAID is the most popular due to its low cost. With 3 disks approximately 75% of the disk capacity is available. It requires only a minimum of 3 disks and supports the complete loss of one disk. The information is served in blocks distributed by the total of the disks so the more disks the more performance also influences the size of the disks the bigger they are the more time it takes to rebuild the RAID in case of failure of a disk. This RAID protects against failures by distributing the parity calculation over all the disks and thus protecting against possible hardware errors.

The weakness of this type of RAID is that if a disk fails, until it is replaced the volume is unprotected against failure of another disk. This is where Spare disks come in. A spare disk is a reserve disk that enters “to be part of the game” when one of the disks fails, this way the number of disks that can fail is two (as long as the RAID is not in reconstruction process when the second disk fails) This way we avoid the failure point mentioned before. When the spare disk is added, this type of RAID is also known as RAID 5E. There are two types of spare: “standby spare” and “hot spare”.

If it is a standby spare it involves a rebuilding process during the addition of the spare disk replacing the failed disk, however if it is a hot spare this time is minimized. 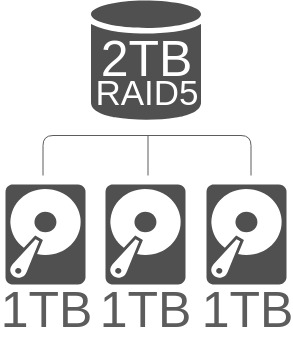 Let’s say it is the evolution of RAID 5, it needs at least 4 disks. It works like RAID 5 but with double parity stripe which is also spread over all disks. This type of RAID supports the total failure of up to two disks even during the RAID rebuild. It is less used because when few disks are used the capacity of two disks is wasted because they do not reach the theoretical maximum, with 4 disks the RAID will have about half the capacity of the disks. The more disks used in the RAID, the more capacity of each disk is used.

As in RAID 5, in RAID 6 spare disks can be added (usually called RAID 6E) to support a third failed disk (the latter can fail without corrupting the volume as long as the raid is not being rebuilt). 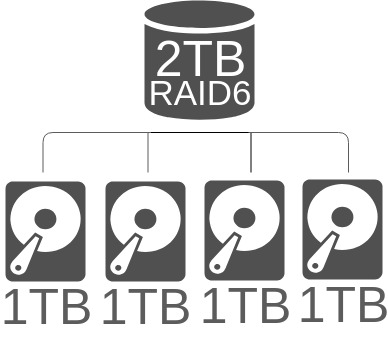 Nested RAID levels is “RAID on RAID”. That is a RAID of one type mounted on RAID(s) of another type. This way you can take advantage of the benefits of each RAID. For example:

The most common RAID types are:

How to mount in linux each type of RAID with “mdadm”:

A raid in linux is very easy to configure using the steps we are going to describe:

Step 1: Install mdadm: by default it is not usually installed on Linux.

In debian and derivatives:

On RedHat / CentOS and derivatives: 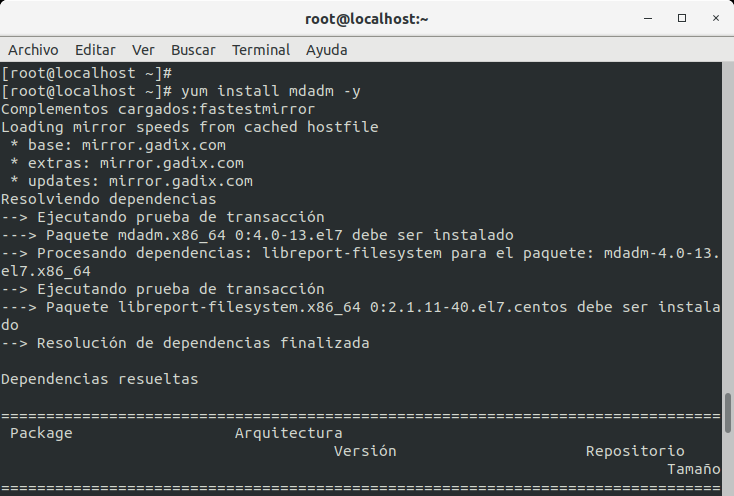 Step2: The disks to be included in the RAID must be filled with zeros to avoid problems with existing file systems:

(And so many other disks to use) or with DD: 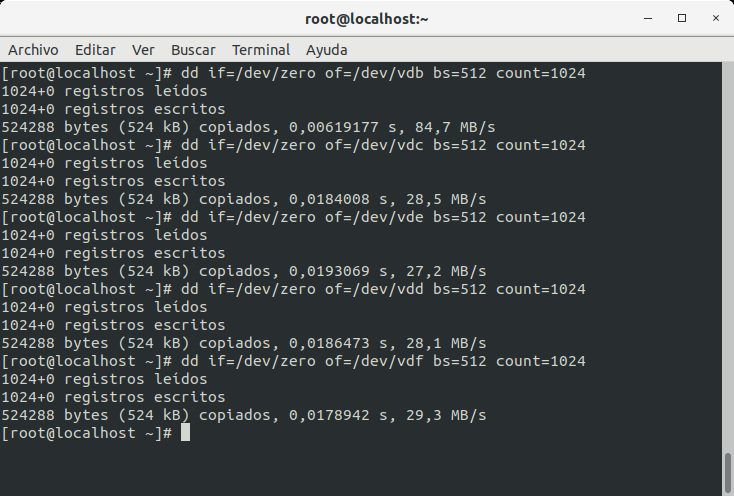 Step 3: The next thing would be to create the RAID, basically it would be with: 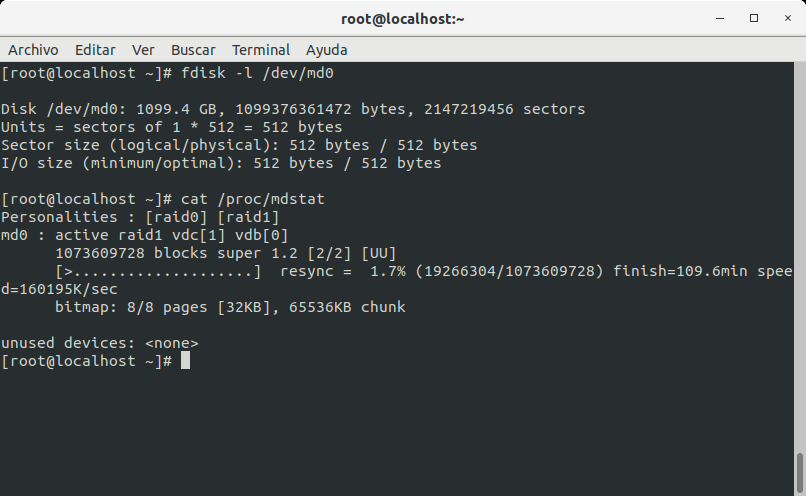 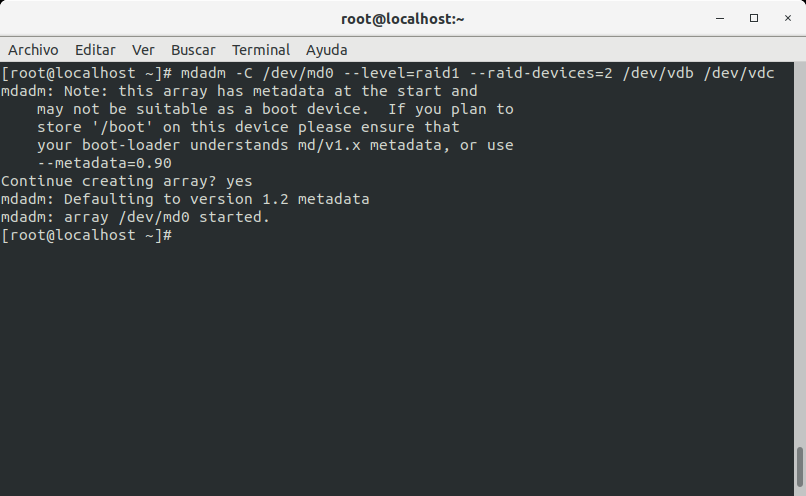 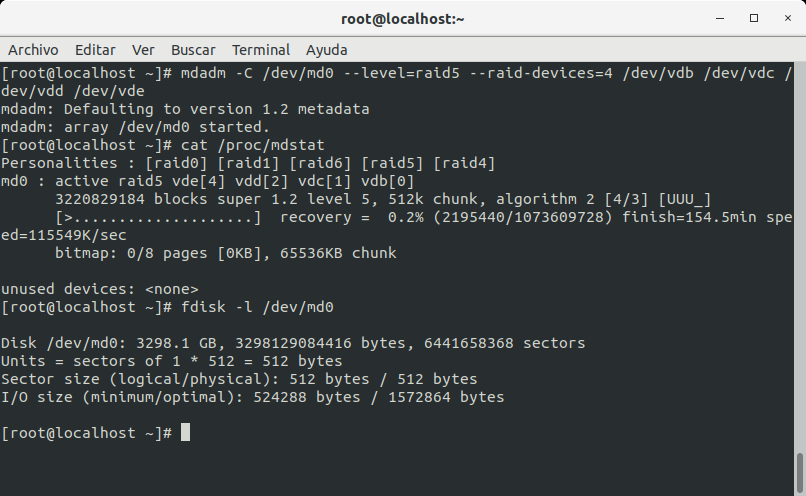 If we want a spare disk (we have to add all the disks including the spare to the RAID from the beginning):

And with spare parts:

In case of failure of a disk of a RAID we only must extract it and insert the new disk and when we introduce the new disk (looking at the system log of /var/log/messages) we execute:

In case you want to stop a RAID:

And this has been all about how to create a software RAID in linux with mdadm.